From Firewatch Wiki
(Redirected from Figure)
Jump to: navigation, search 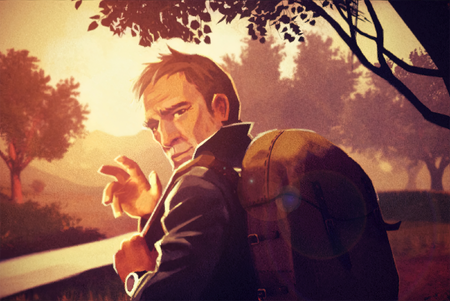 At first known as "The Figure," he is initially an unknown character in Firewatch that was spotted on the way back to the Lookout Station. It is suggested that either this character or the Teenage Girls are responsible for breaking into and wrecking the station.

Later in the story, it is discovered that the character is Ned, an old firewatch lookout just like Henry who has been living in the woods ever since the death of his son Brian Goodwin. Henry later comes across Ned's bunker, abandoned due to the fire that Ned set. He had a good relationship with his son and described him as a "bright child". It is believed he was the one who wrecked Henry's lookout tower because he blames his son's death on the crew.

It was stated by Delilah that before Ned worked for the forest service he was a member of the United States Army where he received his training in electrical communications and was eventually discharged possibly due to Post Traumatic Stress Disorder. Prior to joining the fire watch he had a son named Brian whom he seemed to have a strained relationship with. Three years prior to Henry joining the fire watch Ned took a job with the forest service and was stationed at the Two Forks tower, bringing his son Brian along despite it being against regulation. He would attempt to teach Brian about Rappelling and mountaineering despite his son having no interest in the activity. It was during one of these lessons that Brian would fall to his death in Cave 452 after one of his climbing anchors came loose. Rather than return home and endure the questions and ordeal of a funeral, Ned fled into the wilderness leaving no trace of where he'd gone.

At some point afterward, he would set up a base camp of sorts in the old bunker, salvaging or stealing whatever he needed to get by.

At some unknown point Ned stole the key to the access gate inside the Cave 452, locking it off from the public to prevent Brian's body from being discovered.

Ned is first seen as a shadowed figure shining a light down at Henry when he returns from the lake after exiting the Thunder Canyon cave. It is believed that while Henry was returning Ned broke into the Two Forks tower stealing several items and throwing Henry's typewriter out the window.

Ned then would cause more trouble by cutting the communication line north of the canyon and planting several beer cans and other evidence implicating the two teenage girls of the crime leading Henry to their camp with a trail of litter, (After having destroyed the campsite leading the girls to flee believing Henry responsible) and planting Henry's sheets making him believe the Girls responsible for the break in as well.

During all this Ned would be using equipment stolen from the Wapiti Meadow research station to monitor Henry and Delilah's radio conversation taking numerous notes and making numerous logs which he would later plant at the station.

While at the lakeside tracking a problem bear Henry recovers a notepad left behind by Ned detailing the conversation he and Delilah had the night before, only for Ned to knock Henry unconscious after luring him with the sound of an old radio and stealing both items back.

Ned's monitoring eventually leads Delilah and Henry to the conclusion that the Wapiti station scientists are spying on them. After Henry breaks in and sees the records and steals the wave receiver Ned burns the camp in order to destroy evidence, inadvertently causing it to merge with pre-existing (Name Determinant) Fire.

Ned eventually plants a backpack with a key to Cave 452 gate rigged with an alarm and transmitter to lead Henry to it, all the while breaking back into the Two Forks tower leaving behind a tape player containing a recording of Delilah and Henry implicating them in the fire at Wapiti Station.

Ned contacts another lookout using Henry's name stating that Delilah knew the cause of the fire at Wapiti Meadow prompting Delilah and Henry to investigate the cave. Ned then slams the gate and locks it attempting to trap Henry inside. Leading Henry to discover Brian's remains inside the cave.

The next day Ned rigs a tape to a transmitter collar attached to a rope for Henry to discover. The tape contains a statement by Ned explaining his actions over the course of the summer, taking responsibility for everything that had occurred, stating that due to Henry's discovery and the massive fire approaching he is leaving to find a new place deeper inside the park. Stating that Brian's death was an accident and that he is sorry for all the trouble he caused Henry and about Julia's Illness.

What happens to Ned after this is unknown but he is implied to be living somewhere deep within Yellowstone Park.