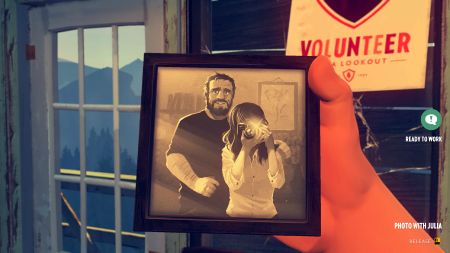 Julia is a character in Firewatch.

Much like Delilah, this character is never actually seen in Firewatch. She is Henry's wife, and throughout correspondence with Delilah, he reveals a lot about Julia. She is suffering from early-onset Alzheimer's, and prior to Henry taking the job of firewatch, she is moved "home" to Melbourne, Australia to live with her parents and receive care for her illness.

The only image we have of Julia is the photo which sits on Henry's desk at Lookout Station. In it, her face is obscured by the camera. We also briefly get to hear her voice over the radio, as one night Henry is delusional in his half-awake state and thinks he is speaking to her (even though it is really Delilah).