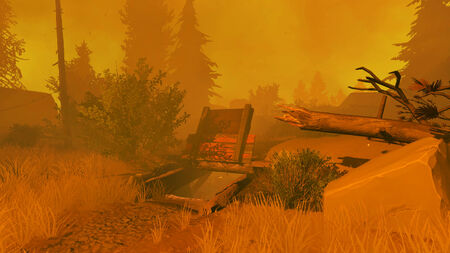 The Ned Goodwin's Bunker is an important area in Firewatch.

Ned Goodwin's Bunker is a location in west-central Two Forks. It is found on a hill overlooking the lake trail, and is only accessible late in the story.

Inside the bunker several different items can be seen, Most likely collected by Ned Goodwin throughout his time living within the Two Forks area.

At the entrance of the bunker on the left is a makeshift bed. Above which a copy of Wizards and Wyverns can be found along with a father's day card and a picture of Brian Goodwin.

Several makeshift workbenches and desks can be seen each holding a variety of items.

Next to the third table a box can be seen containing the old batteries salvaged from the old snowmobiles used to power and charge the many electrical instruments used by Ned.

Finally at the end of the bunker a lawn chair and cooler can be found. A radio receiver that was used by Ned to monitor Henry and Delilah's radio communications is found here. there are also several hardcover books , and radio logs written by Ned.

Both Thoroughfare and Two Forks towers can be seen from the opening at the end of the cave.

It is likely that all of this was destroyed by the massive wildfire that eventually consumed Two Forks and the surrounding regions.